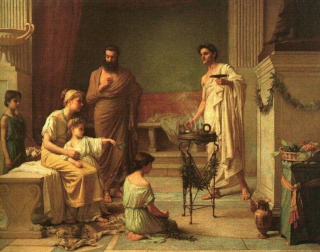 Last edited by Erodius on Fri Aug 02, 2013 8:56 pm; edited 6 times in total
_________________
"O Best of Gods, blest daimon crown'd with fire . . . hear, and from punishment my soul absolve, the punishment incurr'd by pristine guilt, thro' Lethe's darkness and terrene desire: and if for long-extended years I'm doom'd in these drear realms Heav'n's exile to remain, O grant me soon the necessary means to gain that good which solitude confers on souls emerging from the bitter waves of fraudful Hyle's black, impetuous flood!"
-Iulianic Hymn to Apollon-Helios, ll. 65-106

"Having come for punishment, one must be punished. One must not pull apart the god within oneself."
-Iamblichus, Vita Pythagorica

"Truth would you teach, or save a sinking land,
All hear, none aid you, and few understand."
-Alexander Pope

Thank you for that excellent essay. I learned a lot!

Wow this was really good to read through.